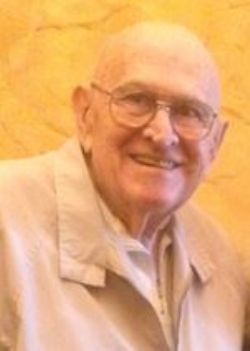 Stan, born on December 16, 1927 in Kansas City, Mo. to parents, Leonard and Ann (Frost) Braton. He was known for his brilliant mind, witty quips and endearing sense of humor. He was truly loved and respected by all who were blessed with knowing him.

After graduating high school, Stan was inducted into the Army, serving in both WWII and the Korean war, where he perfected his Poker hand and later used the GI Bill to earn his JD in law. He acted as a marriage counselor and later as an insurance agent before he fell in deeply in love with Margretta (Gretta) Anne Snyder. They were married on December 18, 1959, in Kansas City Mo and remained lovingly devoted to one another until her passing. Once married, they moved to Warrensburg, Mo. where they lived until 1979. Stan was a partner in a local law firm, later became the town's Prosecuting Attorney and lastly a private practicing attorney. That year they moved to Oklahoma City OK, to own and operate a small business for the next several years. The next stop for them was Kerrville, Texas where Stan utilized his legal skills by working in the Sheriff's Department for many years prior to retiring.

In his later years, Stan found love again and lived the rest of his days with his devoted wife, Reita Braton. Stan is survived by his loving daughter, Toni Curry of CA, and two grandchildren, his wife, Reita and her children: Faith (his loving caregiver), Vicky, Monte, Caleb, Carece, Stephen and their families.

He is preceded in death by brother, Richard; sister, Elsa; first wife, Margretta; and daughter, Hope.

In lieu of flowers, contributions can be made in the name of Stan Braton to Hilltop Village, 1400 Hilltop Drive, Kerrville, TX 78028.

In honor and remembrance, we pray.

To order memorial trees or send flowers to the family in memory of Leonard Braton, please visit our flower store.