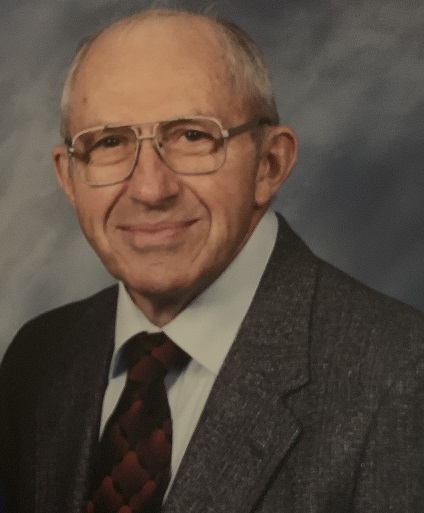 Lester Eugene Chappell was born March 28, 1924, in Adams County, Iowa, and passed away in a local hospital on September 27, 2020.He was the son of Lester Earl Chappell and Beulah Beckwith Chappell.

Eugene grew up the son of Iowa farmers. He graduated from Corning High School in Coming, Iowa, and Iowa State College in Ames, Iowa, with a degree in Ag Economics. In 1950, he married the love of his life Beth Nadine Van Houten. On November 24, they would have been married 70 years.

Eugene was very proud of his military career as a World War II combat veteran achieving the rank of Tech Sargent. In the summer of 1942, he was a county 4-H delegate at Iowa State College (University). In the 1980s, he served on the Economic Advisory Council at Iowa State University. He was also active in 4H as a member of the 4H County Committee, Farm Bureau, Soil Conservation (County Board Chairman and co-chairman of Stats Field Day), and Masons. In 1966, he received the highest recognition in soil conservation for Western Iowa and Nebraska, a contest sponsored by the Omaha World Herald. He served as Masonic Lodge Master in 1966 and was a 50- year member. He and Beth enjoyed hosting a foreign exchange student from France from 1976 -78 which he considers one of their greatest pleasures. They remained in touch throughout the years. He enjoyed spending most of his adult life as an Iowa com farmer. He was active in church, sang in church choirs and enjoyed attending many choir events. In 1993, Eugene and Beth retired to Kerrville, where they enjoyed traveling and continued to be active in community and church. He attended First United Methodist

Church and was very active in the Keystone Class, Chancel Choir and Saints Alive Choir.

Eugene grew up with strong values. All who knew him have either seen or experienced his generosity and his sincere desire to lend a helping hand to anyone in need. The values he learned in his youth and college years carried over into his adult years, and he has never lost the desire to give back.  He always appreciated receiving help with scholarships throughout his college years and wanted to pass it forward to other students as well. This is evident in his involvement with scholarship programs in both Iowa State University and Schreiner University here in Kerrville. Even after moving to Kerrville, he and Beth continued to keep a garden and enjoyed giving away many of their fruits and vegetables. He volunteered many hours at the local Kathleen C. Cailloux Theater with set building, mailings and ushering.

Eugene is survived by his wife Beth.

In lieu of flowers, donations may be made to Schreiner University, First Presbyterian Church or First United Methodist Church.

Arrangements are under the direct and personal care of the professionals at Kerrville Funeral Home. (830)895-5111

To order memorial trees or send flowers to the family in memory of Lester Chappel, please visit our flower store.