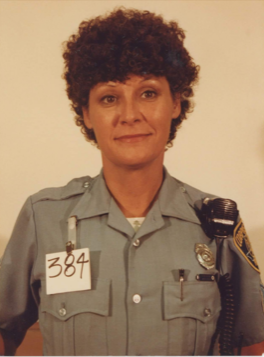 Linda Blount Roberts, 79, passed from this life on Friday, August 21, 2020 peacefully at her home in Kerrville.

She was born December 21, 1940 in New Orleans, LA to parents Ann and Neil Blount.

Linda joined the police force on June 4, 1973 as a community service officer before joining the police department and completing the Twenty-third Academy in January 1974.  As the time she was recognized as one of the first two females to be assigned to patrol. Linda worked patrol and later moved in to the traffic division where she became best known for traffic enforcement, especially on Weber Road where she earned the nickname “The Witch of Weber” for her diligent patrolling. Linda married  the love of her life, Pat Roberts on July 2, 1979 they lived in Corpus Christi, TX for 37  years. She was promoted to sergeant on February 22, 1982, and retired on May 31, 2002 after a long and distinguished career.  Linda loved her country and dedicated her life's work to serving as a police officer she will be greatly missed by all who knew her.

Linda and Pat retired to Kerrville in 2010 where they enjoyed many things, especially their weekly outings to Mamacita's Restaurant where they were regular patrons.  They also enjoyed traveling around the world, fast cars and spending time with their friends.

To order memorial trees or send flowers to the family in memory of Linda Roberts, please visit our flower store.