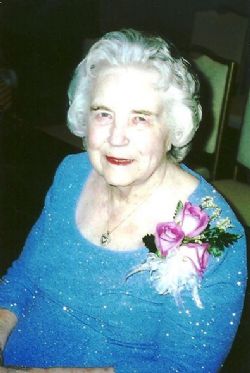 
Louise Kerr Thomson, 93, of Kerrville, passed from this life into the loving arms of her Lord and Savior at a local care facility following a long and debilitating battle with Parkinson's Disease on Tuesday, January 16, 2018, at 9:50 a.m.

Born in Tarkio, Missouri on December 14, 1924, she was the youngest daughter of Robert and Vida (St. John) Kerr IV, and grew up in Hackensack, New Jersey, graduating from Hackensack High School.

Louise worked as a comptometer operator for the New York Herald Tribune in New York City prior to marriage, and later, briefly for Humble Oil in Houston.

On June 8, 1946, in Hackensack, NJ, she married Kenneth MacDonald Thomson, the love of her life, whom she met in Central Park, NYC, at a USO dance. Ken, a native Texan, was in the Navy at the time and on his way overseas. They were happily married for 64 years, prior to Ken's passing in December of 2010. During their married life, they moved 21 times as Ken, a Johns-Manville executive, rose through the ranks.

A loving wife, mother and grandmother, Louise was an avid homemaker who devoted her life to the raising of her four children, and to her husband. She loved to knit and crochet, as well as do needlepoint and sew.

A faithful Christian, over the years she sang in church choirs, was an active member of Christian Women's Club and Ladies Circles, attended numerous Bible Studies, taught Sunday School classes, and was a 26 year member of the First Presbyterian Church of Ingram, prior to joining First Christian Church of Kerrville late in life.

More than anything she loved her family.

Louise was predeceased by her husband, Ken, one son-in-law, William R. ''Bill'' Jackson, her parents, and her two sisters, Betty Gustafson of Hot Springs Village, Arkansas, and Margaret Marshall of Dodge City, Kansas.

A private family grave side service will be held at Garden of Memories in Kerrville at 11:00 a.m. on Saturday, January 20th, with Rev. Dr. Dan Sebesta officiating.

The family would like to thank the nurses, aides and physical therapists at Hilltop Village who cared for Louise the past 4-1/2 years, particularly her nurses Heather and Carrie, and Marcus, her physical therapist. Special thanks too, to the Peterson Hospice nurses and care givers who kept her comfortable in her final days.

Memorial donations in Louise's honor may be made to the Michael J. Fox Foundation, which is dedicated to finding a cure for Parkinson's Disease. Donations can be made directly by going to: www.michaeljfox.org

Arrangements are under the direction and personal care of the professionals at Kerrville Funeral Home (830) 895-5113.