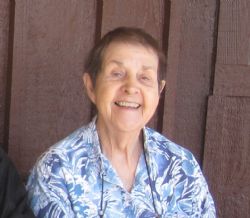 
Vivian Louise Hearn Tucker, aged 93, slipped peacefully from this world on July 28, 2019, nearly two weeks after suffering several strokes. Louise was born the oldest of five children in February 1926, to Lawrence Karl Hearn and Maxine Green Hearn in Stone, KY. The family moved to Fairfield, IL around 1936. Louise attended Fairfield schools, graduating from high school in 1944. While in junior high school, she met her future husband, Lenard Earl Tucker. She married Len in August 1944, while he was home on medical leave from WWII. They took the train to San Francisco to begin their married life together, with Len staying in the US Marine Corps for another 21 years. They lived in CA, NC, GA, CA (again), IL, SC and NC (again).

Louise and their three young children, all born in the San Francisco area, moved home to Fairfield in 1957 for eighteen months while Len was stationed in Japan. Louise was a musician, playing the piano and organ, as well as singing in choral groups at several of their stations. She always had music playing in the home. In addition to being a full-time mother, Louise kept up with special high school friends, attending reunions when possible. She and her sisters made the time to have many ''sister get-togethers'' through the years. When Len retired from the military in1965 they moved to Texas, settling first in Longview, then moving to Arlington for several years.

Louise was a volunteer at the Arlington Memorial Hospital and was active in the First Christian Church. In 1976, they moved to Kerrville and built their dream home, which Louise designed and helped build, on the Tierra Linda Ranch in the Texas Hill Country. For the next 38 years Louise volunteered at the local VA hospital, played piano and organ at their church and at the Alzheimer's home, and was very involved in ranch activities. Louise and Len also traveled the country in their RV, visiting all 49 contiguous states, as well as many locations in Canada. In 2014 they moved to Austin, TX to be near family. Most recently, due to declining health and mobility, she was living in Sundara, a memory care residence in Round Rock, Texas.

Louise was predeceased by her parents and two sisters. She is survived by her beloved husband of 75 years, Lenard E. Tucker, her brother Karl Hearn (Mary), sister Patricia Hearn Gregory (Robert), and children Linda Tucker Gitter (Robert), Patricia Tucker Davis (Bill), Michael Lawrence Tucker (Camille), 8 grandchildren, 10 great grandchildren, and many nieces and nephews. Her sweet disposition, sense of adventure and multiple talents will be missed by everyone who knew her.

In accordance with her wishes, there will be no memorial service at this time. Louise wanted her ashes to be combined with those of her husband and spread in the Texas Hill Country and the Pacific Ocean near San Francisco. Anyone wishing to make a donation in her name could consider the Alzheimer's Foundation, The Tierra Linda Volunteer Fire Department (www.tlvfd.com) or a charity of their choice.


Arrangements are under the direction and personal care of the professionals at Kerrville Funeral Home (830) 895-5111.
To order memorial trees or send flowers to the family in memory of Louise Tucker, please visit our flower store.