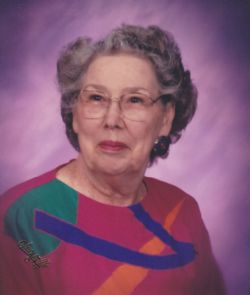 
Marion Orr Wells, 95, died Sunday, January 28, 2018, at her apartment at Brookdale Senior Living in Kerrville, TX. The family appreciates the wonderful care she received there. She had a brief visit to the hospital, and then returned to her apartment for her final days with the care of Peterson Hospice and Home Instead of Boerne.

Marion Orr Wells was born April 8, 1922, in Ancon, Canal Zone, to Joe Harvey Orr and Ninnetta Mattes Orr. Her family was proud of the fact that her dad was given the Roosevelt Medal in recognition of his work building the Panama Canal. She graduated from Balboa High School and attended the Canal Zone Junior College. She was employed by the Panama Canal Company for three decades as an Administrative Assistant for the Engineering and Construction Division. She enjoyed her work, her co-workers, and the complications of the Panama Canal, a frequent topic at dinnertime.

She was married to Fred Ethan Wells on April 27, l945. They had three children, Fred E. Wells, of Perth, Australia, Alan H. Wells of Duluth, Georgia, and Mary Linda Fealey, of Oak Harbor, Washington who preceded her in death. Their spouses are Patricia Summerfield, Kathy Jane Wells, and Guy M. Fealey. Marion has 3 grandsons and 4 granddaughters and their spouses, 6 great granddaughters, and a brand new great grandson. She was very close to her brothers, Joe, Mattes, and Robert, and her sister Mary. Mary and Marion shared a birthday, but Mary was four years older. Marion loved her children, her many relatives, and her friends dearly.

Marion was a people person and loved to talk with anyone. She had many friends in the Panama Canal Zone, many who retired to Kerrville and others who are now spread around the US. Life in Kerrville and Greenwood Forest allowed her to make many more friends in Texas. She was something of a poet, and kept the wide-spread family up to date by writing an annual Christmas poem about us all for many years. She was great at solving crossword puzzles. She played Canasta with friends weekly.

Marion and her older sister Mary were both Eastern Stars in the Canal Zone, and made many life-long friends in that group. Daughter Mary Linda Fealey also was an Eastern Star, and her daughter Jamie followed in all their footsteps.

Fred and Marion were extremely happy with their choice of Kerrville for their retirement. Fred grew tired of retirement and worked as a guard for Schreiner College for l8 years, and Marion was active as Secretary at the Hunt United Methodist church for many years. She and other Zonians enjoyed making Christmas crafts for the annual church bazaar. Fred and Marion lived in Greenwood Forest for almost 40 years.

Interment will be in Maple Leaf Cemetery Oak Harbor, Washington with her husband, Fred, daughter, Mary Linda, and granddaughter, Jamie Fealey on Saturday March 24. Kerrville services were held at Hunt United Methodist at 11 AM Thursday, Feb 8. The family invites you to leave a message or memory at www.kerrvillefuneralhometx.com by selecting "obituaries". Select "Sign guestbook" at the top of the individual memorial. Arrangements are under the direction and personal care of the professionals at Kerrville Funeral Home (830) 895-5111

To order memorial trees or send flowers to the family in memory of Marion Wells, please visit our flower store.
Send a Sympathy Card