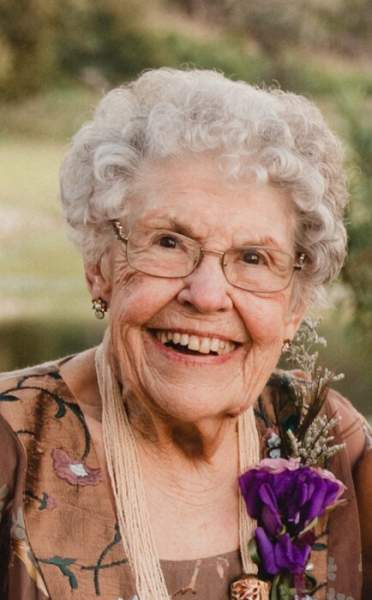 Mary Elizabeth (Kitchell) Faust, 93, of Kerrville, Texas passed from this life on May 8, 2020 in Kerrville.  Beth was born May 31, 1926 in Galveston, Texas to parents Douglas and Pauline (Russo) Kitchell.

Beth grew up and attended Ball High School in Galveston. In 1943 she married Harry Louis Faust in Galveston. Mary Elizabeth was known by many names.  Some called her Mary, many called her Beth or Mawmaw, but the name that described her best and most widely known, was Sweetmama and that is what she was.  Not only to her own children and grandchildren but to all who knew her for any length of time.

She had an infectious laugh and sharp mind, as evidenced by her uncanny ability to work crossword puzzles, the number of times she won high at bridge and the quarters she handed out to grandchildren from mahjong winnings. She had an eye for fashion and never hesitated to give you the bracelet off her wrist if you admired it.  She loved to have adventures with her grandchildren and great grandchildren.  However, the adventures most enjoyed, were culinary in nature.  Her meatballs and stuffed artichoke were legendary and continue to be emulated by her children and grandchildren.

There are countless memories and stories that can and will be shared about Sweetmama at some point, but for now, we just remember her as the sweet soul she was, and one who loved to love.

She was preceded in death by her parents, her husband of 42 years, Harry Louis Faust and dear son, Robert Anthony Faust.

Mary’s remains will be interred with her late husband Harry Louis Faust in Dickinson, Texas.  A memorial celebration of her life will be scheduled at a later date.

In lieu of flowers, memorials may be sent to Christian Assistance Ministries (CAM), Kerrville or the Kerrville Food Relief Fund.

The family would like to thank the caregivers at Brookdale Plaza who took care of Sweetmama and took the extra time to visit with her and make her smile as well as the nurses and staff of Peterson Hospice, who took tender care of all of us.

To order memorial trees or send flowers to the family in memory of Mary Faust, please visit our flower store.