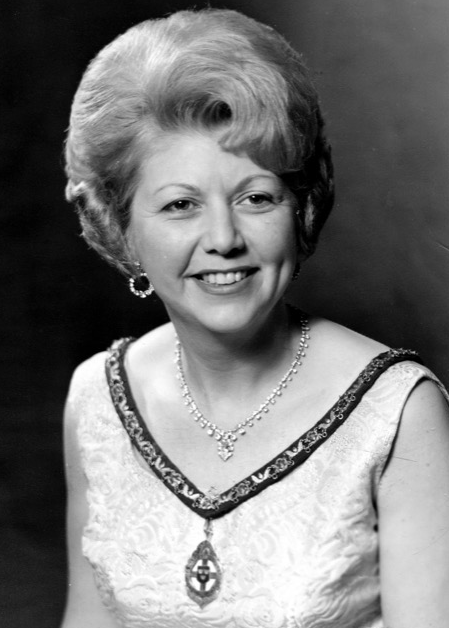 Mary was born on April 15, 1927 in Sheffield, Yorkshire, England, the only daughter of George and Gladys Moyer.

She started her working career as a secretary at Davy United in Sheffield, and later at the GPO (General Post Office) in Great Yarmouth, England. Mary then became ‘Mine Host’ at The Centurion Public House in Caister-on-Sea, Norfolk (where she was able to put her musical talents to good use). Her hard work in the industry was given recognition by her being voted in as President of the Ladies’ Auxiliary of the Licensed Victuallers Association. After leaving the Pub business, Mary joined Vetco Gray, an oilfield service company, working in both Great Yarmouth, and finally Aberdeen, Scotland, until her retirement in 1980. She and her late husband, Delbert Lemons, originally from Okmulgee, OK, retired to the USA in 1985, becoming a Naturalized US Citizen in 1996.

As well as having a ‘day job,’ being surrounded by a musical family sparked, inevitably, a secondary career with Mary performing in musical theatre, where she appeared in such shows as ‘Land of Smiles,’ ‘Zip Goes A Million,’ ‘King’s Rhapsody,’ and as the Principal Boy in the pantomime ‘Beauty and the Beast.’  She was an accomplished cabaret singer in East Anglia, England, which led to her singing on Anglia TV and an appearance on Hughie Green’s ‘Opportunity Knocks’ on Radio Luxemburg. Throughout her life, Mary utilized her organizational skills with such groups as The Daughters of the British Empire and the First United Methodist Church’s Keystone Class here in Kerrville (as well as working in the office of the FUMC), and was active in many choral groups both in the UK and in the USA. Mary made friends wherever she went and will be sorely missed by all.

A celebration of Mary’s life will be held at sometime in the future when we can all safely gather to share happy memories. The family wishes to express their gratitude for the loving care given to Mary by the staff and nurses at Hilltop Village and Peterson Hospice. She will be forever in our hearts.

In lieu of flowers, the family request donations be made, in Mary’s memory, to the charity of one’s choice.

To order memorial trees or send flowers to the family in memory of Mary Lemons, please visit our flower store.
Send a Sympathy Card