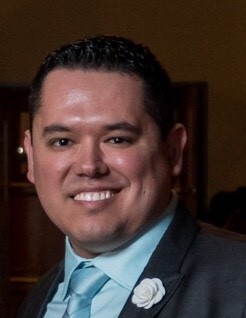 Naythan Randall Murrell 33 of Tyler, TX passed from this life on Monday, October 19, 2020.

Naythan was born April 16, 1987 in Fredericksburg, TX to parents, Steven R. Murrell and Patrica (Aguirre) Murrell. He was baptized at an early age at First Baptist Church of Katy. In 2005, he graduated from Katy High School and was involved in Animation Show Choir. Naythan also traveled to Africa for a mission trip. He attended Houston Baptist University where he participated in many organizations such as a singing group called FOCUS & Refuge, University Singers, REC Team and even was a Freshman Lord on the homecoming court.

He was proud of his time working summer camps with John Sherrill’s 220 ministry.

On December 12, 2012, Naythan graduated from Sam Houston State University with a Bachelor of Mass Communication, Concentration in Public Relations.

While studying at SHSU, he was a small group leader with Chi Alpha Christian Ministry. Naythan and friend, Kelly Arena started the SHSU global center for journalism and democracy. He was proud of the center and the work that was done all over the world.

In his spare time, he sang with the praise band on Sunday mornings and Wednesday nights at First Assembly of God.

2013, Naythan lead and supervised the safety department at Veriforce for 6 years. He helped take it from 2 people to a team of 10 auditors.

He was proud of his CSST (Construction site safety tech) certification.

There’s so much to say about Naythan that we could go on forever. So much talent, in one person, to say the least. His passion for music was unimaginable. Anywhere we went, he would use his voice to bring people together. His smile mixed with his voice would light up the entire room. Naythan was the type of person to get along with everyone. Whether he knew them or not, he would make friends everywhere he went. Such an outgoing and joyful person he was. Hopefully, he is in heaven singing his heart out to his audience and has everyone smiling with joy. We will definitely miss that voice and that smile, but it was his time to share his talent with the ones above. We will always cherish all of your moments Naythan Murrell. You are gone but you will never be forgotten.

He is preceded in death by his cousin Clarissa Menchaca, his grandmother Karen Murrell and aunt Tamara Graham.

Those left to honor and cherish his memory include his parents Steven and Patrica Murrell of Katy, TX; grandparents Alexander and Oralia Aguirre, grandfather Kenneth Murrell, siblings Nicole Mohammud and husband Aneal of Houston, Texas and Clayton Murrell and wife Megan of Tomball, Texas and nephew Enzo Mohammud along with many loving aunts, uncles, cousins, and friends.

Funeral services will take place at 10 AM on Saturday, October 24, 2020 at Kerrville Funeral Home with interment to follow at Garden of Memories Cemetery at 3250 Fredericksburg Road, Kerrville, TX 78028.

To order memorial trees or send flowers to the family in memory of Naythan Murrell, please visit our flower store.