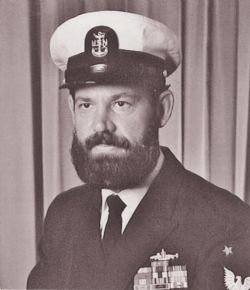 
Paul L. Adkisson, 80, of Kerrville passed from this life on October 16,2018 at his residence. He was born December 18, 1937 to John Milton Adkisson, Sr. and Velma Gifford Adkisson, in Bakersfield, CA. He attended intermediate schools in Tulare, San Luis Obispo, and Bakersfield, California where he attended Emerson Jr. High and Bakersfield High.

He entered the United States Navy in December 1955 from which he retired with honors in April 1976. During his commendable military service he advanced quickly to E-9, the highest enlisted grade and served several duty stations as Command Master Chief. Paul served aboard destroyers, oilers, submarines and two years in-country, Vietnam. During his service he earned an impressive assortment of awards and medals that included the Navy Achievement Medal with Combat "V" and Combat Action Ribbon.

Paul fully retired from his third and final career as Vice President of a California based industrial security corporation. Not being one to remain idle for long he put pen to paper and authored his widely accepted autobiographical documentary Anchors and Eagles, his tell-all history of eye-opening, interesting, sometimes outrageous experiences; a book offering far more than just a glimpse of a sailor's world.

During his years of employment Paul's work took him to many foreign lands which included Japan, Okinawa, Philippine Islands, New Zealand, Vietnam, Singapore, Hong Kong, Korea and Thailand. Never to be dissuaded, Paul tackled Foreign Languages with great determination and was conversationally competent in several.

Paul was active in the world of poetry during which time he received recognition from the International Society of Poets. He was also active in Masonry having achieved his 1s through 32nd degrees at MacArthur Lodge in Seoul, Korea.

Paul will be remembered for the many skills he acquired during his lifetime and the profound and inexhaustible manner in which he exercised them. Even though he achieved all of his significant goals he never stopped in his quest to make things better for all who willingly and wantonly shared their love and their lives with him. Paul was, in all respects, a remarkable person and will never be forgotten by anyone whose heart he touched.

Private services will be held at a later date.

To order memorial trees or send flowers to the family in memory of Paul Adkisson, please visit our flower store.