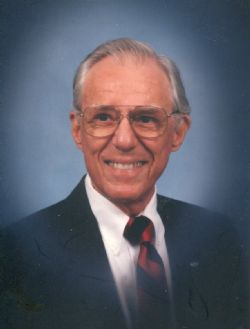 He enlisted in the Army Air Corps reserves in 1942 and was called to active duty shortly thereafter. He entered the aviation program and flew P-47s in the Pacific Theatre (Iwo Jima). He left the service in 1946 and attended the University of Washington, graduating in 1950. In 1951 he was recalled to active duty and served in Korea.

While working in Atlanta, he met Junell Olson. They married February 7, 1986 and moved to Guadalajara, Mexico, living there for three and a half years. After discovering Kerrville, they decided this is the place to retire.

Russ is survived by his wife Junell, son David and his wife Sherri and daughter in law Debbie Holmer. Son Dan passed away in 2009.

In lieu of flower, memorials may be made to Hill Country Youth Ranch P.O. Box 67 Ingram, TX 78025, Shrine Children's Hospital or the charity of one's choice.

Interment will take place at 10 AM on Thursday September 14, 2107 at Fort Sam Houston National Cemetery with full military honors . No further services are planned.