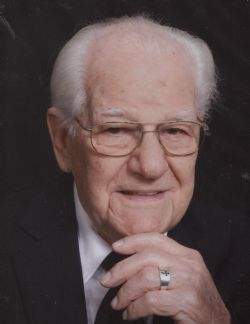 
Richard LeRoy Brocious, 99, of Kerrville, TX passed from this life on Tuesday, December 18, 2018 while at Hilltop Village Rehabilitation & Nursing Home in Kerrville, TX.

Richard's parents, Harry Willis Brocious (Coal Miner) and Inez Sarah Shaffer Brocious (Housewife) were married in Timblin, PA on January 27, 1917.Richard was born in Timblin, PA on November 26, 1919, raised and attended grade school in Timblin, PA. In his boy hood days, his hobby were hunting and fishing. His first employment was a Coal Miner. Richard Brocious and Rebecca Claire Smeltzer (Climax, PA) were married in Cherry Tree, PA on August 5, 1941.
He served in the Army Air Corps during WW II. He was assigned to Kirtland Field in Albuquerque, NM, attached to 383rd Bombardier Training Squadron. Richard served from 1942 to 1946 in the Mediterranean Theatre of Operations, attached to the 12th & 15th Army Air Forces group.

Richard worked as a Coal Miner and attended night classes to become an Aircraft Mechanic. He completed courses in aircraft & engine maintenance as a licensed aircraft mechanic in Clearfield Aviation Institute in Punxsutawney, PA. He worked as a welder for Piper Aircraft in Lock Haven, PA.

He moved his family (wife, Rebecca Claire and two children, Jack Eugene Brocious and Janice Sue Brocious) from Pennsylvania and resided in Woodbridge, VA from 1955 to 1983.

Richard was employed as A&E (Aircraft & Engine) Mechanic for American Airlines at Washington National Airport, Washington, D.C. from September 12, 1955 until his retirement on June 1, 1983.

Richard was a Scout Leader in the Boy Scouts. As a member of the Good Sam Travel Club, he spent 26 years RVing with wife, Becky in their motor home. He and Becky enjoyed 15 years of Square Dancing in Washington, D.C. area.

He often told people that he had been ''retired'' longer than he had ''worked''.

In November 1985, Richard and Becky relocated in Kerrville (Ingram), TX, as their son and daughter had already resided in the Dallas/Ft. Worth area. They continued RVing in their motor home with close friends and Good Sam chapter members. Dick loved playing his guitar, singing, and entertaining residents at Hilltop Village Nursing Home. He was a member of the St. Paul Methodist Church from 1942 to 2018.

After Becky's death in 2008, he continued bowling, playing his guitar & singing, and was active in the Dietert Center. Along his journey he met Raelene Besier. They had music in common and enjoyed playing their guitars and singing together. They married on August 31, 2013 when he was 93 and she was 79.

Richard will be laid to rest beside his first wife, Rebecca Claire Brocious at Warsaw Cemetery in Brookville, PA.

In lieu of flowers, Richard ''Dick''requested that contributions be made to St. Paul Methodist Church, Kerrville, TX.