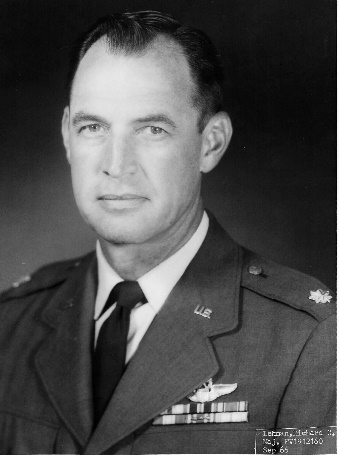 Richard Carl Lehman, age 93, made his last flight on silver wings on December 11, 2020. Richard was born to Raymond Herbert Lehman and Ruth Esther Schafer Lehman on February 5,1927 in Reading Pennsylvania.

Richard, a child of the Depression, joined the U.S. Army Air Force Reserve as a junior at Wyomissing High School. As the senior class president, he went on active duty when he graduated in 1945.Richard’s military career spanned 22 years as he went through the ranks from Army Private to a USAF Major. From a B-29 aircraft mechanic and Crew Chief in the Philippines, to a B-47 then B-52 pilot in the Strategic Air Command, Richard retired in 1967 as a decorated Command Pilot.

Richard married Patsy Sue Graves on February 10, 1951 at Reese Air Force Base in Lubbock, the same day he was commissioned as an officer in the United States Air Force.After retiring in 1967, Richard moved his wife and four children to Kerrville where he worked for Mooney Aircraft as a company pilot, test pilot, service representative and sales agent. Leaving Mooney because of their financial problems, Richard and Patsy opened two stores downtown, Mode-O-Day and The Added Touch. Later, Richard opened the Lone Oak Real Estate office with Leon Long. Richard retired again in 1985 and he and Patsy spent the next 11 years motor-homing America and Canada.

Richard was a member of Zion Lutheran Church, the Kerrville Masonic Lodge AF and AM, Alzafar Shine Temple of San Antonio, Charter VP of the Air Force Association Kerrville Chapter, and past member of the Military Officers Association of America, and Heart of the Hills Lions Club.Richard Carl Lehman, a third generation Mason, was raised as Master Mason on the 8TH day of February 1972 at Kerrville Masonic Lodge #697. He helped in the design of the new Lodge building used today. Richard was a 32nd degree Scottish Rite Mason and was also formally knighted in the York Rite Commandry no. 7 in San Antonio, Texas in November of 1975. He was later accepted into the Alzafar Shrine Temple in San Antonio where he served in the early 80’s as the Chairman of the Hospitaller’s committee, transporting children and their parents to Houston and Galveston to the Shriner Hospital facilities.

Preceding Richard in death were his parents, sisters Evelyn Schell and Louise Dunn Smith of FL, and brothers Ronald of PA., Raymond Jr. of Kerrville and Robert of OR.

There will be no services at this time.

Arrangements are under the direction and personal care of the professionals at Kerrville Funeral  Home (830) 895-5111.

To order memorial trees or send flowers to the family in memory of Richard Lehman, please visit our flower store.