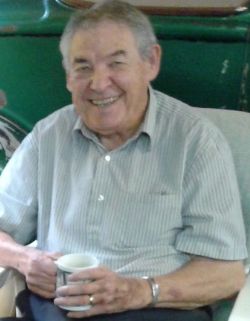 
Dick was born to Dean and Charlotte Pierson in Ames, Iowa on July 18, 1935 and passed away September 25, 2017 in Kerrville, Texas. After graduation from Ames High School he entered Iowa State University to study architectural engineering. While working in bridge design for the Iowa Department of Transportation he met and married a Norwegian farm girl named Georgia Roberts.

He soon left the DOT for the construction industry, designing homes for Hunziker and Furman in Ames and building the occasional spec house. During this time he obtained his broker's license and eventually opened his own realty office.

Fortunate to be able to retire relatively early, he took on the occasional commercial design commission while indulging his passions for golf, antique and special interest cars, bikes and toys. Amassing a large inventory of antique car parts made him a fixture at swap meets large and small across several states, where the fun was in the haggling, not necessarily the sale. A brilliant short game allowed him to winkle a couple of bucks out of his playing partners on the golf course. Any bruised feelings were soothed by an encyclopedic recall of jokes, clever and often inappropriate. The only thing Dick enjoyed more than laughing was making other people laugh. He also amassed a large toy collection and he often said ''he who dies with the most toys wins''. Dick was definitely a winner.

Dick was preceded in death by his parents and his two sisters Phyllis and Marilyn. He is survived by his wife of 60 years Georgia, his four children Bruce (Sue), Mark (Barb), Kristina (Bill), and especially his youngest son Craig, who's efforts and assistance allowed his mother to keep Dick in his home with his beloved puppy Max until his passing. He also leaves behind 7 grandchildren and 8 great grandchildren.

A special thank you to Hill Country Hospice in Fredricksburg for their excellent care and concern. Please send any donation in Dick's memory to the hospice to allow them to continue providing their wonderful services.
There will be no local services at this time.

To order memorial trees or send flowers to the family in memory of Richard Pierson, please visit our flower store.