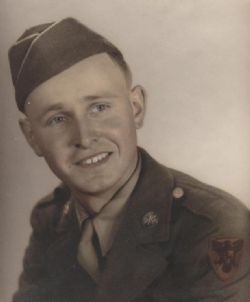 
Richard Nello Porter, Sr., age 95 passed peacefully from this life on Friday, March 4, 2016 at a local nursing home in Kerrville.

Nello, as he was known to family and friends, grew up on the family farm near Argyle, Texas. He attended Denton High School and went to work for Gulf Oil Corporation immediately after graduation in 1940. His work on a seismograph crew eventually took him to Cottonport, Louisiana where he met the love of his life, Nell Callegari and they were married on December 20, 1941. They celebrated 71 years together until Nell's passing in June 2013. On January 29, 1943 Nello was inducted in to the United States Army where he served in the 86th Division Signal Corp. He was a teletype and radio operator and attained the rank of Staff Sergeant. Nello served in Central Europe and the Philippines. He was honorably discharged January 27, 1946. He returned to Gulf Oil Corporation to continue his career on the seismograph crew and was promoted to crew chief shortly thereafter. Those who worked on the seismograph crew were known as doodlebuggers. Nello ''doodlebugged'' over most of the southern and southwestern United States from Florida to New Mexico. Nello left Gulf in 1960 and he and Nell purchased Lure Lodge on the banks of the San Marcos River. In March 1961 they traded Lure Lodge for the Western Motel in Munday, Texas. They operated the motel for over 20 years and retired to Kerrville in 1984. Nello was a devoted husband and father. He had the gift of gab and could converse with anyone on practically any subject. His stories and sense of humor will be sorely missed.

Graveside services will be at 2:00 PM, Monday, March 7, 2016 at Garden of Memories Cemetery, 3250 Fredricksburg Road in Kerrville, Texas with Reverend Sam Ligon officiating. Full military honors will be provided by the Vietnam Veterans of America. Open visitation will be March 7, 2016 at Kerrville Funeral Home.

He is survived by his son, Richard Nello Porter, Jr of Stockdale, Texas, daughters Teggy Catherine Darden and husband Jerry of Lubbock, Texas and Tammy Nell Porter of Kerrville, Texas, grandson Richard Nello Porter III and wife Kim of Gainesville, Texas and one sister, Babs Ione Porter Kaiser of St Charles, IL.
The family invites you to leave a message or memory at www.kerrvillefuneralhometx.com.

Celebration of life services are under the personal care of the professionals at Kerrville Funeral Home. (830) 895-5111