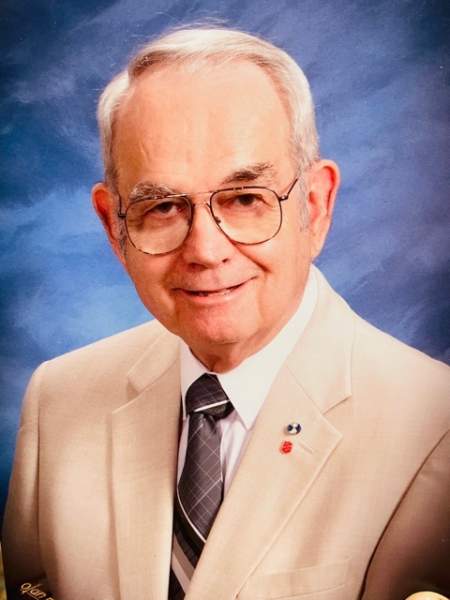 Keith was born in Dayton, OH on April 10, 1931 to Marion L Longnecker and Mary E (Whitesel) Longnecker, the second child of five.

Keith spent his early years in Eaton, OH and graduated from Eaton High School. After that, he was off to Cincinnati, OH to attend the University of Cincinnati’s School of Architecture.  His college career was interrupted by the US Army when they drafted him to serve in Germany during the Korean War with the Army Corp of Engineers.  Once the Army granted him an honorable discharge, Keith returned to Cincinnati and finished his Bachelor of Science Degree in Architecture.

After college, Keith embarked on a long and rewarding career in Architecture.  He had his own firm with one partner for a time and also worked for Equitable and Hastings, Trevino & Trevino Inc. in Dallas, TX.  Along the way Keith was married and had one daughter and one son. Somewhat unlucky in love, Keith made a few attempts before marrying the love of his life, Roberta Wells on October 15, 1983.

After “retiring” and moving to Kerrville in 1994, Keith kept busy with many architectural projects, building and remodeling private homes, commercial buildings, and church projects such as the columbarium at First Presbyterian, Kerrville.  He was the architect for La Hacienda Treatment Center in Hunt, TX and completed many projects for them.  The most recent project for La Hacienda was the new medical building which includes an 18 bed detox unit, medication room, and offices for four doctors.

In his middle years, Keith enjoyed golf and bowling, but throughout his life, the hobby he truly loved was woodworking.  He made custom furniture that was both beautiful and functional.  He also loved wood turning- he made pens, bowls, lidded boxes, pocket and pendant watches, candle holders and lamps.  He won awards for some of his turnings and his creations can be seen at the First Presbyterian Church of Kerrville in the form of offering plates and the tall candle holder beside the altar.

Keith was a member of several fine organizations throughout his life and served in official capacities for some of them.  The organizations include Lamda Chi Fraternity, Rotary Club, Jaycees, Kerr Arts and Cultural Center, Hill Country Turners and Sons of the American Revolution.

Keith was well loved and will be missed by his family and friends.

He is preceded in death by his parents, wife, Roberta Wells Longnecker; sister, Joan Dortch and brothers, James and Dennis Longnecker.

Flowers are welcome, however; Keith would have been proud to know that donations were made in his name to Hill Country Youth Foundations or another charity of your choice.

To order memorial trees or send flowers to the family in memory of R. Keith Longnecker, please visit our flower store.