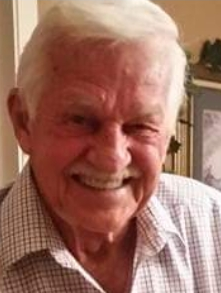 Recitation of the Holy Rosary

Robert was born and raised in Chicago, Illinois. After high school, he was drafted into the United States Army. He married Camille Bukowski on April 7, 1956 in Ft. Carson, Colorado and together they raised six children. Robert and his family lived in Dallas, Texas from 1974 to 1996 before moving to Kerrville where he owned and operated Sunhill Construction and The Mail Room. He was parishioner at Notre Dame Catholic Church and a member of the Knights of Columbus.

He is preceded in death by his parents, George and Mary Sarna; wife, Camille Sarna and grandson, John R. Beatty.

Visitation will be held on Friday, May 27, 2022 from 5-7PM at Kerrville Funeral Home with recitation of the Holy Rosary taking place at 6PM.

Funeral Mass will be held at­­ 10:30AM on Saturday, May 28,2022 at Notre Dame Catholic Church with burial to follow at Garden of Memories Cemetery.

To order memorial trees or send flowers to the family in memory of Robert Frank Sarna, please visit our flower store.

Recitation of the Holy Rosary