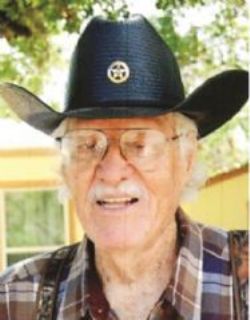 
Rowland Louis Tessier Jr. passed away Sunday, May 13, 2018, at his home in Center Point, Texas.
He was born April 6, 1930, to Rowland Louis Tessier and Harriet Satterfield Tessier in Texon, Texas, an oil company community. He attended schools in Texon and Big Lake, Texas, where he graduated from Reagan County High School. He went on to attend New Mexico Military Institute, where he participated in the school's horse cavalry and other sports.
He served as a captain in the New Mexico National Guard for many years.
He followed his father's footsteps in the neon sign business in Roswell, New Mexico, where he had many successful business years and participated in community service through Sertoma Club and serving as president on the New Mexico State Fair board. He enjoyed acting and directing little theater productions, where he also earned recognition. Later he moved on to other businesses in Tucson, Arizona, and Las Vegas, Nevada.
Upon retirement, he settled in Comfort, Texas, for several years. In 2001, he married Patricia McNally of Center Point, Texas, formerly of El Paso, Texas. They shared a great love and happy marriage for 17 years.
He was an avid genealogist and western history investigator. Rowland was a 60-year Mason and enjoyed all areas of Masonic activities, including blue lodge, York Rite and Scottish Rite areas of service. His home lodge in Center Point, where he was a Past Master, was very special to him, as this lodge was formed by Texas Rangers more than 125 years ago. He frequently gave talks on the history of this ''Ranger Lodge'' and was instrumental in helping build up the membership by submitting a magazine plea to other Texas Masons inspiring dual memberships. This financial benefit of his efforts helped save this small lodge and preserve its Texas Ranger history.
He was preceded in death by his parents and his son, Daniel David Tessier.
He is survived by his loving wife, Patsy; and children, Denise Lynn Tessier (husband David Goldfarb), Rowland Louis Tessier III (Susan), Eric Damon Tessier (Laurel) and Mark Swartz Tessier; nine grandchildren; two great-grandchildren; his sister, Sandra Tessier Mock (William); and cousins, Lois Banzet, Betty Johnson and Barbara Purser.
We have lost a loving husband, brother, father, grandfather and great-grandfather who delighted all with many stories of his adventures as well as his knowledge of western history. He had a brilliant mind and talented hands for building things.
All the family gratefully appreciate the kindness and loving care of the good people of Alamo Hospice, who made his transition easier.
Memorial contributions may be made to the Scottish Rite Hospital for Children in Dallas, Texas.
Private services pending.

To order memorial trees or send flowers to the family in memory of Rowland Tessier Jr, please visit our flower store.
Send a Sympathy Card