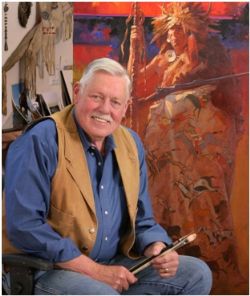 Roy was born in 1930 in Chicago, to parents Anders and Serena Andersen. Older sister Esther adored her new sibling, and this adoration continued through all of their years together until her passing in 2015.

Roy was a Professional Artist with a career spanning over 60 years and encompassing a wide variety of work. He attended the Chicago Academy of Fine Art and the Art Center School of Los Angeles and then began his career as an Illustrator in Chicago, eventually moving on to New York.

Artist's Agent Louann ''Lui'' Ihde called upon the firm where Roy worked in Chicago one cold January day in 1975. Roy met Lui and they talked at great length about art and music and food and a variety of other things. After she left, Roy was berating himself for not having asked her out. He wandered to the office lobby to get a piece of candy from the receptionist's desk and found Lui, studying a piece hanging near the elevator bank. He summoned his courage and asked her out. They were married for 37 years, until Lui's passing in 2013. She later told him that she let more than one elevator go by, waiting and hoping that he might come after her.

Roy did covers for Time Magazine, including very memorable depictions of Albert Einstein and Prince Fahd. He did many illustrations for National Geographic magazine and Sports Illustrated. Roy did two postage stamp series for the US Postal Service - a series of dogs in 1984 and horses in 1985. In both cases, he won the Stamp of the Year Award.

Roy was commissioned to do murals and other work for the National Park Service, the Royal Saudi Naval Headquarters and the E.E. Fogelson Visitor Center at Pecos National Monument in New Mexico. He did a variety of other commissioned work, a notable example being the movie poster for The Outlaw Josey Wales, which he later said was one of his favorite assignments.

Roy made the bold decision to relocate to Arizona in the 80's, to pursue his first love - western art. This love was borne from hours spent at the Chicago Museum of Natural History as a teenager, focusing on the Indian displays, drawing and sketching what he saw. Family stories from an uncle that was a cowboy in Nebraska added to the fascination. For the final 30+ years of his career, he happily focused almost exclusively on western art.

Accuracy, based on countless hours of exhaustive research, is a hallmark of any of Roy's work. Roy was an avid reader and researcher and a lifelong learner. He had many interests and pursued them all with great zeal.

Roy is survived by his three children; Greta Andersen, Karen Andersen and Kurt Andersen. He also leaves behind his three grandchildren; Brian Sarrels, Reyna Andersen and Quin Andersen-Masuda. Roy had numerous friends, near and far, all of whom will miss him profoundly.

A special thank you to longtime family friends Bunny Warden, Trina Nichols and Tony Fernandez. You were truly family to him and your love and support of the Andersen's all of these years is much appreciated.

Many thanks to the staff and administration at Brookdale and Peterson Hospice, for taking such good care of Roy. We know he appreciated it.

Roy would have said it best to all of those he left behind - ''May the trail ride easy.''

A memorial service will be held on Monday, May 27 at 10:00 at Kerrville Funeral Home. In lieu of flowers, please consider a donation to St. Peter's Episcopal Church in Kerrville or another charity of your choice.