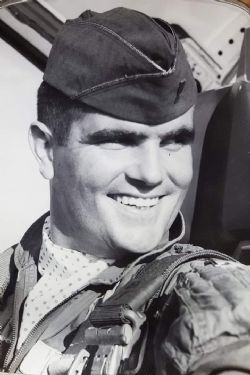 Royden (Gary) was raised in Elkhart, Kansas. He received his bachelor's degree in political science from Fort Hays State University. He joined the United States Air Force in 1965 and served in Vietnam as a F4 fighter pilot. While on his tour in Vietnam, Royden completed over a hundred combat missions receiving the distinguished flying cross. He owned, built and operated Captains BBQ on Hwy 71 which is now called Poodie's Hilltop Road House. Royden also owned contracting business traveling all the United States putting sanitation equipment in fast food establishments until he retired at the age of 70.

He is preceded in death by his parents, Royden and Vivian High.

Those left to honor and cherish his memory include his wife, Betsy High; brother, Dwight High and wife, JoAnn; daughter, Micki High Ferguson and husband, Andrew; son, Royden Buckmaster High and wife, Pamela; grandchildren; Torrey and husband, Chris, Corbin and wife, Hope, Nikole and Royden; great grandchildren, John and Arthur along with numerous cousins, nieces, nephews and neighbors that will miss him dearly.

In lieu of floral tributes, the family has requested memorial donations be made to the Wounded Warrior Project, P.O. Box 758516 Topeka, Kansas 66675-8516.

There will be no local services at this time.

Arrangements are under the direction and personal care of the professionals at Kerrville Funeral (830)895-5111.

To order memorial trees or send flowers to the family in memory of Royden High, please visit our flower store.