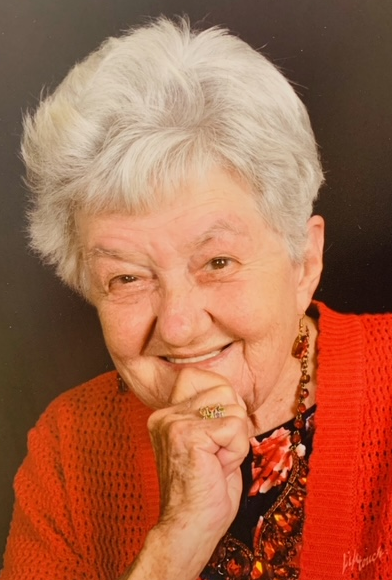 Chris McBride, as she was affectionately known by friends and family (Ruby Christine Richardson McBride), passed on to her heavenly home on Thanksgiving Day, November 26, 2020 around 2:00 PM at a local care facility. She was 90 years old.

Ruby Christine Richardson McBride was born the only child of Arthur and Florene Richardson in Kansas City, Missouri on June 3, 1930. Her childhood home was in Independence, Missouri and she later spent the majority of her teen years in Centralia, Missouri. Christine Richardson met her future husband (James C. McBride) at the teen club in Centralia, Missouri where she often played requested tunes on the piano. They both attended Centralia High School. They were married November 10, 1946 in the parlor of her parent’s home. He was seventeen and she was sixteen. He joined the Air Force and trained in San Antonio, TX where together they began a military life filled with the richness of travel and the vast variety of worldwide experiences and new friendships that such a life generates. They were married for 62 years.

Ruby Christine Richardson was a gifted seamstress, studied piano 11 years, worked as an accountant for the State of Tennessee, was a member of the Harlingen, TX Art League, studied painting technique under noted artist Bill Earl, taught painting classes for children, was a life time Bible School teacher for the Church of Christ, served as a mentor and teacher/caregiver for the Mothers of Preschoolers Harlingen chapter of the organization, served beside her husband, James McBride during his years as an Elder for the Harlingen, TX Church of Christ located at 8th and Harrison Street. Along with her husband (a Rotary Club member) she hosted a Rotary Club sponsored foreign exchange high school student, Ivandro Trevelim, in their home. Ivandro remains (along with his family in Brazil) a dear friend treasured as a member of the McBride family.

The Air Force took Chris and her husband James (Jim)and their 5 children on what turned out to be a missionary journey for Christ that became an unforgettable and beautiful experience that won many souls to Christ along the way. They became ambassadors for Christ everywhere they went. If there wasn’t an active Church of Christ where they were assigned; they helped start one. When stationed at Plattsburgh Air Force Base in northern New York they found a small group of Airmen meeting at the YMCA on Sundays. Eventually my father and a handful of the men raised enough money selling bonds to build a permanent building for the church to meet in. Chris and Jim helped lay the floors and nail the roof tiles on that building. Plattsburg Air Force Base no longer exists, but the Church building is still there today and the congregation of The Church of Christ still meets there and is a firm part of the community shining its light for Christ.

Chris McBride shined vibrantly as a devoted Christian wife, mother, grandmother and Christian friend to many. She filled the lives of her husband, children, and grandchildren with her exuberant creativity, rich imagination, and joy filled personality. Together with her husband she helped to teach many adults about Christ in their many homes over the years and many were baptized into Christ as a result of those home studies. Chris loved having guests around her table for meals and if she knew of anyone who didn’t have family to share a holiday meal with; she made them welcome at her table. She shared generously of all that she had all the days of her life. I know the Lord has a place at his table for this extraordinary woman. The door of her home was always open to anyone who needed a friend. She left behind for all who had the privilege of knowing her a great legacy of Christ based love. She was exceedingly proud of all of her children and grandchildren.

To order memorial trees or send flowers to the family in memory of Ruby McBride, please visit our flower store.