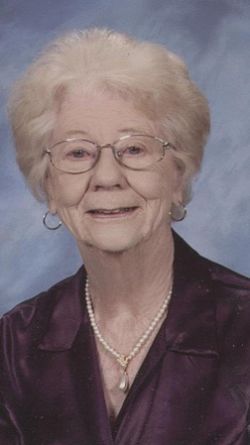 
Ruth Lynne Cowing Scarce, 99, was born at home in Granada, MN on July 23, 1918 to Jessie Snow Cowing and Francis (Frank) Levi Cowing. The fourth of eight children, her early years were spent in Granada, Minnesota. Ruth left home at 16 to continue her education in St. Paul, eventually graduating from high school in Fairmont.
After high school Ruth returned to St. Paul to attend art school and then worked at JC Penney and Woolworth's creating signage. In 1943 she joined the war effort with the Women's Army Corps (WACs). She was inducted by Eleanor Roosevelt who shook her hand! She trained in Commerce, TX and then Spokane, WA before shipping out to England on the Queen Mary, which had been retrofitted to transport troops and equipment for WW II. She was stationed in Cheltenham, England where she served as a teletypist and worked deep underground in a bunker sending and receiving messages. Even though it was wartime she still managed to have some adventures and make some lifelong friends. She told of air raids and having to go down into the tube stations wearing gas masks.
She met William (Bill) Scarce who was stationed at the same location. He was a country boy from Arapaho, Oklahoma and I don't think he knew what hit him when he met Ruth! They were married in August 1945 in London, England in a borrowed wedding gown. They spent the first night of their honeymoon in a hotel in London as one night was the maximum then, and the rest at the country home of a British family they connected with through the Red Cross, near Checkers, the country home of Winston Churchill.
Upon discharge from the military they lived in southern California, but housing was tight, so Bill reenlisted in the Air Force and they were sent to Roswell, NM where their son Merle Gregory was born. From Roswell they were transferred to Lincoln, Nebraska and then on to Buenos Aires, Argentina where daughter Linda was born. Moves to Albuquerque, NM and then to Panama followed. In the early 1950's they were transferred to Rabat, North Africa. Other postings included Tehran, where Ruth taught English at the University of Tehran and the family spent much time at the American Embassy. Their last stateside assignment was to Little Rock Air Force Base in Arkansas during the Cuban Missile Crisis.
After Bill's retirement from the Air Force they moved to Texas. First to Richardson then Houston and eventually to Austin after they both retired. Ruth had started her career in the insurance industry later in life after they moved to Texas and progressed to Claims Manager for Provident Life in Houston where she supervised 15 Claims Adjusters at the time of her retirement in 1984. She always loved learning and frequently wished that she had been a teacher. She loved flowers and the full moon and was an amateur oil painter in her later years.
Most of her final year was under the kind and excellent care of the VA hospital in Kerrville, TX.
She is survived by her son Greg Scarce (Yvonne) and daughter Linda Scarce-Turner (David), her granddaughters Hilary of Boston, MA, Jennifer of Pflugerville TX, and Laura McIntosh (Michael) of Brookline, MA, Debra Alfata (Elias) and Stephanie Rombal both of Riverside, CA, and great grandchildren George, David and Emelie Alfata, Sterling Rombal, Alex Jaimes and Hazel McIntosh. She also is survived by her sisters Eleanor Wolf and Helen Hardt of Fairmont, MN, sister-in-law Shirley Scarce and many nieces, nephews and dear friends. She was predeceased by her husband, William (Bill) Scarce, as well as her parents Frank and Jessie (Snow) Cowing, bothers Doug and John Cowing, and sisters Thelma Olson, Leona Reiter, and Barbara Jean Franklin.
Services will be held at Kerrville Funeral Home, 1221 Junction Hwy, Kerrville, TX 78028, on Wednesday, May 16, 2018, at 11 AM. A luncheon and fellowship will follow. Interment is scheduled at Fort Sam Houston National Cemetery on Thursday, May 17, 2018, at 9:30 AM.
In lieu of flowers, the family requests donations are made to the charity of your choice.