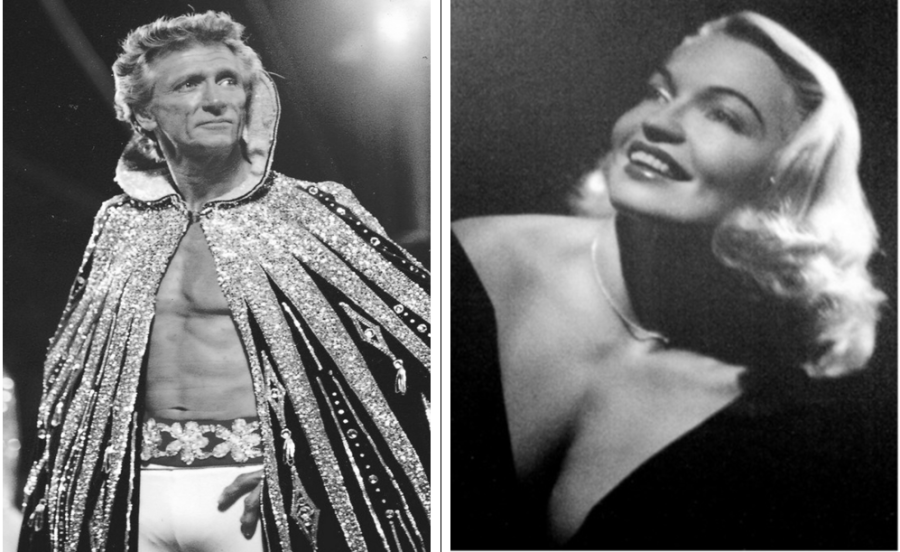 Angel Leon Sonny Stath (a.k.a. Skeeter Flanagan Stath), 94, of Kerrville, Texas, died Friday, February 26, 2021, just days prior to his 95th birthday. “Skeeter” to friends in his youth, and ”Lee” in his later years, Stath was born to Angel and Opal (Flanagan) Stath in El Dorado, Kansas, March 7, 1926. Loving husband to Mary Rose (Atterbury) Stath, who passed on October 13, 2012, Lee passed in his sleep after a long history with cancer. He was attended in his passing by his loving niece, Victoria Atterbury Sterling, of Sioux City, Iowa. He was preceded in death by his sister, Elizabeth (Beth) Mary Stath, 75, of Luka, Mississippi. He is survived by his sons, Tim Dressler and his wife, Hidemi, of Takasaki, Japan, and Michael Dressler and his wife, Amy, of Woodland Hills, California, both children of his first wife, actress Lieux Dressler. Stath served as a torpedoman on the USS Requin and other submarines in the World War II Pacific Theatre. Honorably discharged in 1946, Stath operated a deep water salvage company in southern California but soon met accomplished trapeze flyer, Mary, the love of his life, whom he followed into the circus life. Stath eventually became Mary’s catcher in an award-winning act, “The Flying Marilees,” which enjoyed top billing all over the world. Stath rode a Harley Davidson until the age of 92 and loved playing golf frequently and far into his last year on this earth. Lee will be irreplaceably missed by his family and friends. No services are planned but Lee offers a farewell message, “Farewell from Lee Stath,” printed in this newspaper today.

The top of the bill-We came on next to closing! And there’s no greater tribute in show biz and such was the echelon of

To my credit; Some time ago I was in the 1973 Guinness Book of Records as the first flying trapeze artist to catch a three and a half somersault. It was in Durango, Mexico, 1962. The record lasted for some years until some smart, skinny kid caught a quadruple.

I could save you a lot of grief if you only squandered $20 and bought that classic book I wrote, “She Flies Through the Air” It’s the story of my life after I met Mary in 1952. But I did touch briefly on the Big War in which I participated from 1944 to the end. I didn’t delve into detail as after only 63 years it was still fresh and terrifying. On entering the navy, I volunteered for submarine service. That was only the first step. After three extensive visits to three different psychiatrists, I was accepted. Oh, many volunteered but few were chosen. So, I spent my war in a 300- foot steel tube, many called it a coffin, as a torpedoman 3rd class and we plundered the Pacific from the Philippines to Australia. As a torpedoman it was my unofficial duty to siphon off the excess alcohol that ran the torpedoes on their death search and give it to the old salts to distill into drinkable alcohol or “torpedo juice”. I was much sought after. As for the war, the Japanese, the actual fighting, I was terrified but then so were most of the crew. We were lucky and survived that hell.

Back home to San Antone, they put me through Trinity University where I was awarded a Bachelor of Science degree. So, with diploma in hand I joined the circus. Seemed logical except instead of mesmerizing the masses with my trapeze ability, I was given the title of elephant dung disposer. I persevered and achieved the enviable ranking of number two ring boss.

But back a few years to Trinity University in 1946- We were a legitimate college football team but made up mostly of World War II veterans and ex-high school players. A ragtag bunch of war veterans but mean and tough. We were at the new Alamo Stadium pitted against the Army Airfield Mustangs. It may sound like boasting but I scored the winning touchdown in the last quarter as we beat the Army 92 to 0.

But then Mary happened!

1952 and I had taught English and coached at a tiny high school just long enough to realize that this could not be my chosen profession. A college friend enticed me to a vacant lot on the South Side where a flying trapeze act, The Flying Romas, was laying off for the winter and practicing. It was love at first sight, not only for the fascination of real show business but for the extraordinary beauty of the blonde aerialist. That was Mary. She didn’t know I existed and when her husband (The plot thickens) accepted me as a donkey laborer and we motored north to Chicago she still referred to me as Moe. Undeterred, I plugged away as a ring boy and clamored up on the trapeze at every free opportunity. Mary saw I was serious (in more ways than one) and began to help me. That was the beginning of a beautiful love affair.

Early years were tough, really tough. Despite Mary’s fame and reputation, she was a single entity and needed an act. A telegram from Lansing, Michigan asking her to join a pair of established flyers was quickly accepted if she could bring along her own rigger. (That was me) A leisurely drive in mid-winter in her new Cadillac quickly put me in the girders where I did my specialty of hanging the trapeze rigging. Ninety feet below, Eddie and Clayton, our other two famous performers, got in a dispute and in the ensuing fight, Clayton fell and dislocated his shoulder.  As a flyer, he was finished We opened next day. What to do. Not to worry. I was a flyer. I could fill in and the show would go on.

Mary was appalled and refused to be a part of what she called a farce. She would not perform but agreed to be on the platform with me and drop my return bars. In a flying act a third person was required to carefully time and drop the bar for the flyers return. It was show time. So, I did one trick, returned and did another and then another until my repertoire was complete. Admittedly and sadly, my repertoire was made up of little girlie tricks that failed to impress any one. Particularly the owner of the circus who told us to take down the rigging and get off the show.

On the road again!

Mary, Eddie and I headed for California where she had contacted her old friend, Roy Rogers, who said we were welcome to come out and use his ranch for a place to stay and practice. Only now, it was agreed I would never be a capable flyer, so I must learn to catch and learn I did. True it cost my flyers many a bruised body and scrapped undercarriage but before the summer was out we had obtained a contract with the Clyde Beatty Circus 1954. It was barely a living with one day stands and long jumps between. Life grew tedious and the Flying Mary-Eddies called it quits after 6 months but I had developed into a capable catcher. Unlike the normal catcher of 200 pounds and enormous arms, I was 150 pounds of gristle with long arms, huge hands and slender wrists. Most flyers commented what a pleasure it was to be able to wrap their hands around the catcher arms and help. It did save many a bad trick.

Home in San Antone and we were looking for a flyer once again. Grabbed a young Mexican kid named Roger and began the thankless, tedious chore of turning a gawky, skinny child into an accomplished flyer. A year and a half and Mary had accomplished that. He morphed into a copy of Marys’ style and finesse. We turned Roger into a first-class flyer and were blessed with six years of world travel and lucrative contracts. Roger moved on, but we were rewarded with the worlds’ greatest flyer when Tony Steele joined us for a two years contract in the Far East.

We left New York, bound for Tokyo but enroute, stopped to refuel in Hannover. Short layover and we were once again racing along the tarmac. I had long been fearful of flying but after the quick and uneventful flight over the Atlantic, I had grown confident and even took the occasion to film our take off through my window. Impressive, as we tore along the runway gathering speed when I was puzzled to see these giant tandem wheels go catapulting past my window. My first thought was, “Do they jettison the wheels on takeoff?” That was quickly answered when the starboard wing dipped and began tearing the concrete. Then the other wheels ripped loose, and we had become a screeching bundle of metal leaping and bounding off the end of the runway and farther into a farmer’s field. Silence. A petite Japanese hostess pulled up her tight kimono and shouted, “Follow me!” and sure enough just in front of us was bright blue sky. Our after section of the Boeing 707, Air France Flagship, the Chateau de Versailles had smashed into three sections and we were free to run, panic stricken, after the fleetfooted hostess before the beautiful plane burst into flames. Fortunately, the fuel tanks had just been topped off and there were not the deadly fumes of explosive gas accumulated. Only a few casualties and by next morning we were on our way to Tokyo, again and that was the beginning of a beautiful adventure.

I speak of the Far East but what a wealth of miles and countries that encompasses. Major cities in Japan, luxurious thermal baths and saunas and then a quick flight to Shanghai. Our show was beginning to feel the taxation of all our free living, so our flight was booked with some cheaper air service. The whole entourage was stuffed on board an old 4 engine propeller craft but with our ungodly weight, we never neared take off before they aborted and told us to jetsam all superfluous weight. Coolies were sent in, seats were removed, baggage was left to follow later, no hostesses or peanuts were left on board and still, on an extended runway, we lumbered and staggered into the air at the far end of the runway. Some say they heard the piolets shouting “Banzai” as we clipped the trees.

But I digress, and the lamp is low. Mary, my flyer and mentor, and I married in Tijuana in the year of 1953. Twenty-five pesetas and we were no longer living in sin. But just to make Mother and Dad more comfortable, we had a justice of peace do it again in 1954. Mary was still uneasy, so we were made man and wife in the massive catholic cathedral in Vienna, Austria. So, from beginning to end we had 60 terrific, tumultuous years together. I loved her, I miss her, and I love her still.

So, in closing, I find two pieces of poetry that fit my life so well.

“I strove with none, for none was worth the strife,

Nature I loved, and next to Nature, Art;

I warmed both hands before the fire of life,

It sinks, and I am ready to depart.

“Happy the man, and happy he alone,

He who can call today his own-

He who, secure within, can say:

‘Tomorrow do thy worst, for I have lived today!

Be fair or foul, or rain or shine,

The joys I have possessed, in spite of fate are mine,

Nor heaven Itself over the past has power;

But what has been, has been; and I have had my hour.

To order memorial trees or send flowers to the family in memory of Skeeter Stath, please visit our flower store.