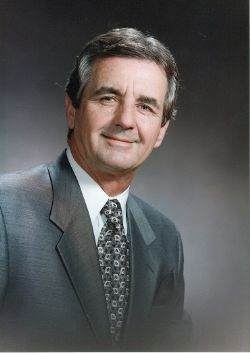 
It is with great sadness that the family of Stevan Max Johnson, 75 of Kerrville, Texas, announces his passing at his home surrounded by family and friends on March 1, 2018.
Visitation will be held on March 6, 2018 at the Kerrville Funeral Home, 1221 Junction Hwy, Kerrville, Texas from 6:00pm-8:00pm.
Funeral services will be held on March 7, 2018 at the St. Peter's Episcopal Church, 320 St. Peter's Street, Kerrville, Texas at 2:00pm. Graveside services immediately following at Garden of Memories Cemetery, 1517 Tx-16, Kerrville, Texas.
Stevan Max Johnson was born August 10, 1942 in Wichita, Kansas, the son of Daniel Max Johnson and Betty Shoemaker Johnson. In Steve's younger years he grew up in Wichita, Caldwell and Junction City, Kansas. He graduated from Wentworth Military Academy in Lexington, Missouri. Steve enlisted in the U. S. Army during the Vietnam War where he served as a helicopter pilot. After completing his service in the Army as a helicopter Instructor at Fort Wolters in Mineral Wells, Texas, Steve established Johnson Bros. Furniture Co. which he owned and operated from 1969-1994. Steve being the entrepreneur he was, owned and operated numerous retail and rental businesses in the North Texas area. In 1994 he retired to Corpus Christi, Texas where he sought out a life long dream of sailing the ocean blue. While in Corpus Christi, he met and married Sharon Hester Lee. In 2015 they moved to Kerrville, Texas where they enjoyed living at Buckhorn Lake Resort and traveling the country in their motor- home.
Steve is preceded in death by his father, Daniel Max Johnson, mother, Betty Shoemaker Johnson, Step-mother, Dorothy Johnson, brothers; Kim Johnson and Jim Johnson.
He is survived by his wife, Sharon Johnson, daughter, Kimberly Benge and husband Brian, son, Daniel Jack Johnson and wife Ashli, Step-sons Justin Lee and wife Ashlee, Lucas Lee and wife Lauren. Grandchildren; Ryan Benge, Ross Benge, Brycen Johnson, Bennett Lee and Luke Lee. Great Grandchildren; Leila and Corban Benge.
The family requests in lieu of flowers that donations be made to St. Jude Children's Research Hospital.
The family invites you to leave a message or memory at www.kerrvillefuneralhometx.com by selecting Obituaries. Select ''Sign Guestbook'' at the top right of the individual memorial.