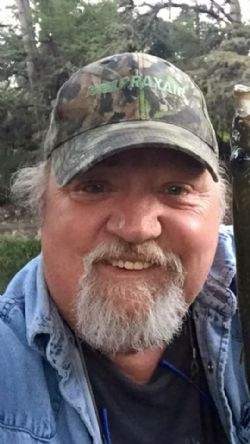 
Steven Lewis Huggins, 66, of Hunt, was called home to be with his Heavenly Father on February 2, 2018 in San Antonio, Texas. Steve was born in Santa Paula, California on April 10, 1951 to Urben and Edna Huggins.

Steve spent his childhood in Archer City, Tx and went to high school in Mesquite, Tx. He then had his daughters Dondi and Lisa in Dallas before moving to Austin. He loved spending time playing the guitar and singing and had a love for cars. He later met the love of his life, Cindy Boren Snider. Steve and Cindy met in 2009 and married on his birthday, April 10, 2010 and resided in Kerrville and then Hunt, Texas for the past 4.5 years.

Steve was an avid fisherman, loved his Harley and pretty much anything outdoors. His favorite place to be was sitting on his front porch. Steve will be remembered by all of his family and friends as someone who always made them laugh with his funny jokes, helped them to stop and enjoy the moment, and never to take life too seriously. He will be dearly missed by the many, many people who adore him.

He is preceded in death by his mother and father Edna and Urben Huggins.

Visitation and a time of reflection will be held on Friday, February 9, 2018 at Kerrville Funeral Home from 5 pm-7 pm.

Graveside funeral services to be held at Rio Frio Cemetery in Rio Frio, Texas on Saturday, February 10, 2018 at 2 pm.

Memorial donations in Steve's honor may be made to the Peterson Regional Medical Center Foundation (551 Hill Country Drive, Kerrville, Tx 78028), which our family will forever be thankful for.