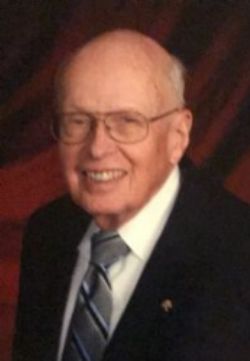 
Walden Shanklin Freeman was a man of quiet dignity, keen wit, and dedication to making the world a better place. He died peacefully at Peterson Regional Medical Center on Friday, April 12, 2019 and will be remembered at a Celebration of Life on Tuesday, April 16, 2019. His memorial service will take place at 11 a.m. at Zion Lutheran Church, with Pastor Mike Williams officiating. A military burial at Ft. Sam Houston will take place at a later time.

Wally was born in Indianapolis, IN August 31, 1930, to Harry Z. and Ellen Shanklin Freeman. As a youth, he was an Eagle Scout and member of Sea Scout Ship I. After graduating from Shortridge High School in 1948, he earned both his bachelor (1952) and master (1959) degrees in history and political science at Butler University.

In 1954, he enlisted in the U.S. Navy and was commissioned an ensign in the U.S. Naval Reserve. He was assigned to active duty aboard the USS Meredith (DD 890), serving in the gunnery department and becoming the gunnery officer in 1956 and thereafter as assistant navigator. Released from active duty in August 1957, Wally continued in the active reserves in Bloomington and Indianapolis, IN, and in Harrisburg, PA. There he served as commanding officer of surface division 4-15 for two years. He retired in 1976 with the rank of commander.

Through the G.I. Bill, Wally earned his Ph.D. degree in history at Indiana University-Bloomington in 1967. His first full-time teaching position (1963-68) was at Gettysburg College in Pennsylvania. He then moved to Fulton, MO, where he taught and served as history department chairman, humanities area coordinator, registrar and associate dean of academic affairs. Wally was named the Louis D. Beaumont Distinguished Professor (1969-70 and enjoyed a visiting professorship at Indiana University-Bloomington in 1972-73. In his final years at William Woods, Wally was honored faculty marshall.

During his time at William Woods, he became president of the Fulton Kiwanis Club, a relationship that continued and gave him joy his entire life.

Wally and Carolyn Louise Robertsdahl (also a professor at William Woods College) were married August 19, 1978 in the college chapel. In 40 years of marriage, they enjoyed national and international travel, often to Kiwanis conventions and Navy reunions. He served as chaplain for the U.S.S. Meredith reunions.

In 1986 the couple moved to Kerrville, TX when Wally accepted the job as vice president for academic affairs at Schreiner College (now University). He worked in that position until 1994, helping build Schreiner as a young baccalaureate-level school. Both at William Woods and at Schreiner, he served as advisor to the Alpha Chi National College Honor Society, including the position of national secretary.

In Kerrville, he served as Kiwanis Club president and lieutenant governor for Division 5 of the Texas-Oklahoma District. He was also an active volunteer for the Hill Country Chapter of the American Red Cross. He and Carolyn were enthusiastic volunteers for Schreiner University. The couple has been devoted members of Zion Lutheran Church. The Kerrville Area Chamber of Commerce named them Volunteers of the Year 2007.

Wally will be remembered for his kindness, wisdom and encouragement. In lieu of flowers, memorials may be made to Zion Lutheran Church Building Fund, Schreiner University, Hill Country Chapter of the American Red Cross, or the charity of one's choice.