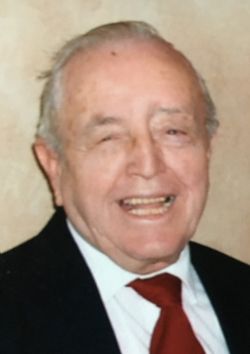 
Wilbert C. Miller, age 93, a beloved and honorable man, went peacefully to be with the Lord on April 26, 2018 in the Heroes Haven unit of the VA Medical Center in Kerrville, TX.

He was born in Clarinda, IA to Clark and Helen Miller on January 14, 1925 and grew up in Weslaco, TX with his sister Ruth Isaacs. He married Chlorene Wyatt of Mercedes, TX in October 1959.

Wilbert began his career at JC Penney in Weslaco and later was employed by Sears as merchandise manager in Brownsville until poor eyesight caused him to resign. While in Brownsville, he belonged to the Lions Club.

He married Theresa Wilson in September 1994 and in a short time they moved to Kerrville. He was an active member of Trinity Baptist Church, always in a bible study and also enjoyed playing bridge with members of his Sunday School Class.

He was predeceased by his wives Chlorene and Theresa and his sister, Ruth Isaacs.

The family wishes to extend special thanks to dear friend Joyce Ingram of Kerrville for her many years of invaluable assistance and prayers for both Wilbert and Theresa. We have been so blessed to have Joyce in our lives!

Visitation will be held from 5-7PM on Friday, April 27, 2018 at Kerrville Funeral Home, 1221 Junction Highway, Kerrville, TX 78028, with interment being held at Highland Memorial Park Cemetery in Weslaco, TX.