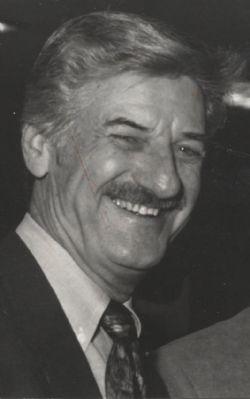 
William ''Bill'' Bond, age 92 passed away Friday, March 18, 2016 at his home in Kerrville, TX. Bill was born October 1, 1923 in Crandall, TX the son of William and Nonnie Bond. He married Dorothy Sheffy and they had been married for over 60 years.

During an interview, artist Bill Bond spoke of his two complete careers: one as an illustrator and designer for advertising and one as a sculptor.

''I have had many articles in art publications, have made several TV appearances and have had three videos made of my sculpting work. I find it difficult to do interviews and feature articles where you talk about yourself, but they are necessary to career promotion.''

After Bill received his training at the Art Center School in Los Angeles, he worked in Los Angeles for a time, in the New York area for two years and in Dallas TX for 25 years, winning over 100 awards, including Dallas-Fort Worth Art Director of the Year. In 1963, he was awarded a gold medal in New York for the best illustration in the nation. In 1979, Bill started his career as a sculptor and upon moving to Loveland, CO in 1989 worked with the legendary Fritz White for two years. His sculptures numbered over 150 pieces and covered western, historic, religious and sports subjects.

In his last year before retiring, he sold 27 life-size pieces in nine months at $14,000 to $58,000 each. He still has seven of the country's finest galleries and has often spoken to service clubs, city councils and galleries from California to Florida. Bill was invited to appear on the Lehrer-McNeal show with Senator Lott, Senator Dodd and an artist from the performing arts. His work now appears in many areas of the United States, Canada, England, Ireland, Puerto Rico and Mexico.

Since His retirement, Bill is rewriting a novel that was written in 1996 and plays golf three times a week. When asked what he was most proud of in his multi-careers, he answered, ''I never bought a lottery ticket or a bottle of water.'' Seriously, he was most thankful for his involvement in his church and the opportunity to help people here in Kerrville. Bill asked the Lord to help him become a good putter and the Lord said, ''I will if you practice a lot.''

Bill was also a veteran, having served in the Army Air Corps during WWII. He was a tail gunner on a B-17, flew 24 missions and survived 3 crashes.

Celebration of life services will be held 2 p.m. Tuesday, March 22, 2016 at the First Presbyterian Church in Kerrville. The family will have a private interment.

The family invites you to leave a message or memory at www.kerrvillefuneralhometx.com. Select obituaries, select ''sign guestbook'' at the top right of the individual memorial.

Arrangements are under the direction and personal care of the professionals at Kerrville Funeral Home.
(830) 895-5111.