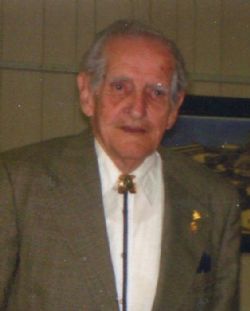 
William Ernest Farris, Jr. of Kerrville, Texas passed from this life on April 27, 2018 at his residence. William was born April 29, 1921 in Longview, Texas to William Ernest, Sr. and Julia May (Brown) Farris.

He graduated from Pettus High School in 1939, and attended Texas A&M for college. He joined the Army Air Corps in August 1940. He was hit by a car and remained at Brooks Army Medical Center for treatment from April 1941 - October 1943. He married the love of his life, Latrel Gaston, on November 26, 1947 in San Antonio. He worked in the oil fields of West Texas for many years.

Moving to Kerrville in 1962, he worked at the VA Hospital as an orderly for 23 years until his retirement in 1985. He was very active with his family, water skiing, camping, and travelling. He was a long time member of Southern Oaks Baptist Church.

William was a Mason from 1946 until his passing with membership in the Kerrville Masonic Lodge #697 A.F. & A. M.; he was also a member of the Alzafar Shrine, Hill Country Shrine Club, San Antonio Scottish Rite, and Kerrville Chapter of the Order of the Eastern Star #24.

William is preceded in death by his parents and his wife, Latrel Gaston Farris.

Funeral Services were held at 9 AM, Tuesday, May 1, 2018 at Kerrville Funeral Home with Dr. Joe Taylor officiating. Interment followed at Garden of Memories Cemetery.