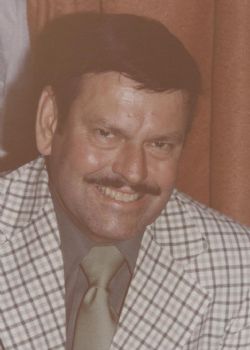 
William C Hoge fell asleep in death August 7, 2016 at the age of 92 at the Alpine Terrace Facility.

Survivors include wife, Olga to whom he was married for 69 years; son William C. Hoge, Jr. and wife Jean; five grandchildren; 3 living in New York and two living in Florida.

Mr. Hoge was better known as "Bill." He was born February 16, 1924 in Roanoke, VA into two very aristocratic and prestigious Virginia family lines. His father, Samuel L. Hoge, Jr., son of Samuel Harris Hoge was a well known lawyer, former Assistant U.S. District Attorney, and later as Postmaster of Roanoke, VA. He also ran for Governor of Virginia. His mother, Nancy K. St. Clair was the daughter of Senator Payton St. Clair of Virginia, who was loved by many.

Bill lived most of his teenage years in the home of his Grandfather and Grandmother Hoge along with his brother, Samuel Harris Hoge II and two cousins, Pat and Betty Jean, and their parents. Bill attended school while living with his grandparents until World War II began. When he became of age he joined the Army Air Corp and was sent to Photo School in Colorado to learn Aerial Photography and soon after to fly on B-17 bombers to photograph bombs being dropped over Germany. His work was appreciated and for such, he was given a citation and one of his photographs appeared on the cover of Life Magazine. In 1945 after his discharge he went to Oak Ridge, TN to work for Union Carbide as plant photographer. There he met Olga Wright. In 1947 they were married and moved to Roanoke, VA. He entered Virginia Southern College to pursue a Degree in Business Administration; he began his own photography business, and started a family. His son, William, was born there.

In 1949 he joined the Army Reserves and was called to active duty during the Korean War where he saw horrendous things. While there he suffered a heart attack and was sent to Japan for treatment and recovery. In 1951 he returned to the United States to join Olga and William in Brooklyn Heights, NY. He began employment with the Wall Street Journal in the accounting department and attended Long Island University at night.

Bill had many questions about the two wars he had been in and how God would settle the war situation. In 1953 several Jehovah's Witnesses came to his home and that started some years of studying the Bible and learning God's plan for the future. He, his wife and son learned what the Bible taught and gave them a wonderful hope for the future. They dedicated their lives to serve God and to do his will.

In 1954 Bill began insurance auditing in New York City and Long Island, and in 1959 the family moved to Long Island so their son could attend better schools.

In 1960 Bill and Fred Smyth opened a Volkswagen repair and body shop in Long Island. The business was sold in November 1963 due to Bill's health.

In 1963 he was hired by Commercial Union Insurance Company doing auditing and was assigned to cover all of upstate and western New York and some of Canada, auditing large companies, such as the Peace Bride and Holiday Inns.

Bill along with his wife, were privileged to have a part in a number of Bible Dramas at various large Jehovah's Witnesses Conventions.
In 1984 Bill took his wife for a two week visit to Hong Kong to visit the U.S. Branch of Jehovah's Witnesses and all the missionaries, which included Harold King and Nancy Yuen (both having been set free from many years of prison for their religious stand). Then Bill and Olga spent a week in Beijing, China.

In 1989 Bill retired from Commercial Union Insurance after 24 years and moved to Orange, Texas. Late he began part-time work for the same company in Houston.

In 1994 Bill, still loving to help in the World Wide Preaching work, was invited by the Presiding Overseer of the Huntsville, TX congregation, to help with the teaching of the Bible in the prison to help the inmates know God better. While in Huntsville he was offered a position to operate and manage the I-45 Climate Control Storage business.

In 1996 Bill was declared legally blind and he and Olga retired to Kerrville temporarily. In 2007 they settled there for good.

Bill was a humble man, mild, patient, and peace-loving. He was a strong believer of Jesus' words in John 5:25 "Most truly I say to you, the hour is coming and it is now when the dead will hear the voice of the Son of God and those who have paid attention will live." Bill is not expecting to awaken to live in Heaven, no, but in A World Without Tears.

A World Without Tears

Just think of a world, a world without tears
Where a man can live for a million years
With never grief or ache or pain, and the thought of dying again.

Think of a world where the man plants a vine
And sits under its shade and says, "this is mine."
Will live in a house his own hands have made
And no man or beast will make him afraid.

Think of a world without bloodshed and strife
Where no man dare take another man's life.
Where man unto man will unite in peace
And jealousy and hatred forever cease.

Think of an earth as a global paradise
Where mountain and desert will dazzle your eyes
With gay butterflies, song birds and bees.
With beautiful flowers and shrubbery and trees.
And as you go on thinking of a world where each
Man is his brother not esteeming in himself above that of another.
Where man unto man will be friend unto friend
Live in a world without tears that will never end


Arrangements are under the direction and personal care of the professionals at Kerrville Funeral Home. (830)895-5111.

To order memorial trees or send flowers to the family in memory of William Hoge, please visit our flower store.