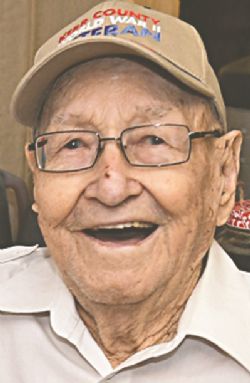 
William Frank (Paw) Holden, 97, of Kerrville Texas went home to be with the Lord and Savior on January 15, 2017 at his residence surrounded by family and loved ones.

William was born in Roxton, Texas on November 14, 1919 to Thomas Benjam Holden and Gussi Mae (Jones) Holden. He grew up in Roxton, Texas doing all the things he could do to have fun and help the family. He met and married Willina (Biggs) Holden, they had two sons, Billy Bob Holden and Deene Holden. Later in life he married Evelyn (Thomas) Holden.

In May of 1944 he joined the army and served in WWII under General Patton assigned to be General Patton's mechanic. After the service, he became the Fire Chief of Ozona, Texas and worked as an auto
mechanic, later opening his own mechanic shop in Rockport, Texas. He was a life member of VFW Post 1480 American Legion, DAV Chapter 8. He also loved fishing, hunting, bowling, and dancing and taught his grandchildren how to do all of it, passing down those hobbies for generations to come.

Our thanks go out to Peterson Hospice and Outreach Health Services for all the help in making his 97th birthday such a special day.

A Memorial Service will be held on Saturday 21, 2017 in the Main Chapel at Kerrville Funeral Home, 1221 Junction Highway, Kerrville, Texas 78028 at 3 PM officiated by Chaplain Matt Melton.